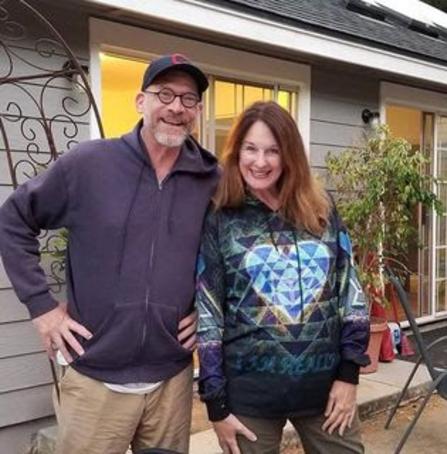 Ms. Butterfield has written extensively for stage, screen and television.  She was a recipient of the George E. Oppenheimer/New York Newsday Award for Best First Play in the New York area (JOINED AT THE HEAD), the Kennedy Center-American Express award for Outstanding Promise as a Playwright, the Kaufman & Hart Award for Best New American Comedy (THE SLEEPER), and the Davie Award for Best New Play in Regional Theatre (LIFE IN THE TREES.)  JOINED AT THE HEAD in which she also acted at the Manhattan Theatre Club, was nominated for a Drama Desk award  and has been extensively produced in this country and abroad.  BROWNSTONE which she both wrote and directed, was a commission by the Laguna Playhouse.  One of her newest plays, TOP OF THE WORLD, was a finalist in the Eugene O'Neill play writing competition and recently won the prestigious Edgerton grant.

During the pandemic and with her husband RON WEST (right)  she has created over 60 short films for a series entitled LIFE DURING LOCKDOWN, added recently to it with a newly created series for marionettes (and people) entitled BUTTERPOTTS PLAYERS PRESENT. The complete set of films can be seen on Youtube.

Other produced full length plays include ​LIFE EXPECTANCY, IT HAS TO BE YOU, WHERE THE TRUTH LIES, and SNOWING AT DELPHI. Also with Ron West, she wrote an evening of politically inspired one-acts entitled WELCOME TO YOUR ALTERNATIVE REALITY  which played at the Open Fist theatre in Los Angeles.  Her plays are published by the Dramatists Play Service, Samual French, Playscripts, Inc and Andak publishing.  JOINED AT THE HEAD was included in the Smith and Krause publication "Best Plays of 1992."

TV writing/producing credits include Grimm, Ghost Whisperer, Party of Five and Fame LA.  She directed the short film John’s Hand, which can be found on youtube.com.  She is a member of Actor's Equity, Screen Actors Guild, the Writer's Guild of America, and the Dramatists Guild of America.

Her daughter is the actress Audrey Corsa. She lives in Santa Monica with Ron West and their cat, Pandita.